Eureka Moments Revisited, Part 9, How They Turned a Washbowl Into a Gold Pan

Way back in January of 1999, I purchased a copy of "At the Extremity of Civilization" by Israel Shipman Pelton Lord.  Lord's diary turned out to be one of the most descriptive and detailed accounts of the overland journey to California and life in the gold fields I had ever read.. His meticulous observations and recorded details of a classic Gold Rush cradle, enabled me to build the authentic recreation that I blogged about in Feb. 2012 ( Eureka Moments Revisited Part 3, A Divine Project or "The Lord's Cradle"). The following story is about something else but the credit for inspiring it goes to Lord and his drive to document the details of his experience.

In Appendix C, on page 429 of the book, there is a crude sketch and accompanying description.

"Round pointed shovels, light and strong, light steel picks and strong tin pans holding about 2 gallons are in most demand. The tin wants to be of the heaviest kind. When made on purpose a strip of tin about an inch wide and made convex outward is soldered under the rim or wire on the outside making a smooth round projection to take hold of. Imagine this fragment of a pan in diagram ( Lord's reference to his sketch, seen below ) to be bottom side upward you can see the roll of tin on the outside. Such pans bring 6 dollars here, plain ones 5, old worn, bruised light ones 3 1/2 to 4."

When I first read this back in 1999, I wasn't quite sure what Lord was describing having never seen an actual example of this style of pan. I didn't think much more about it until my friends Nick Kane and Jon McCabe discovered physical evidence of these pans while metal detecting for Gold Rush relics.

One of the primary resources for Gold Rush material culture study is the incredible  photographic record that has survived. As these pans gained our interest, we wondered if there were any images of them in use ? You know the old saying, once you know what you are looking at, things start popping up. Right there in one of the most published Gold Rush daguerreotypes, was the pan of interest.

Some time later, another amazing image surfaced as the perfect document of this "improved" wash bowl / gold pan.


My friend Nick sent me this illustration by contemporary artist Charles Christian Nahl, which  appears to depict the pan. Nahl is well known for his accurate portrayals of Gold Rush life and was one of the most prolific artists of the period.


What more could I want ? It took awhile but I finally decided that the time had come for me to make a replica of this pan. My friend Jon McCabe gets the credit for recreating the first one though.

Jon copied his original 5 section, pieced pan shown above. It was recovered from a mining camp site on one of his metal detecting adventures. 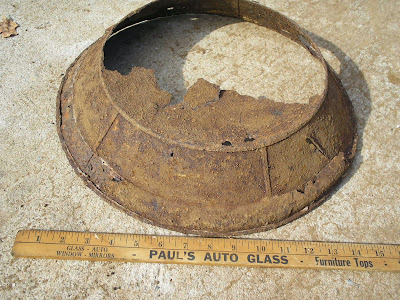 Here's another view that show the remaining sections of the original pan. 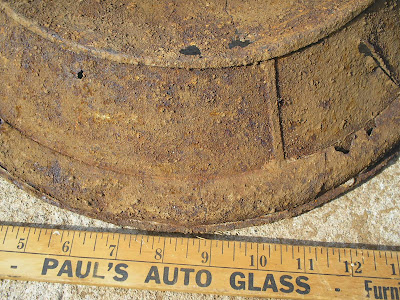 And another closer view.

He was also fortunate to have a neighbor create a die which helped him form the curved sections needed.


Jon's example gets the prize for most authentic and as such now resides in the El Dorado County Historical Museum. Great job McCabe !!

Eons ago, I made a historic style, pieced pan using an original 4 section wash bowl that I own for the pattern. It is 15" in diameter and about 3 1/4" deep and made from unplated sheet steel. It holds 2 gallons exactly as Lord described.  I've even used it for recreational panning over the years and discovered that my hands would tire from holding the narrow rim. When you consider that a good panner needed to wash about 40 - 50 pans a day, any improvement in comfort would have been welcome.﻿


I decided to use this existing pan and alter it to recreate the "improvement".After some experimentation, I finally arrived at a pattern for the convex sections. The hardest part was the compound curves, as the pieces have to fit two different arches, while resting on the tapered side of the pan.

Without an original example to copy, my version would be an impression at best but still faithful to the historic pattern. I formed the pieces over a curved piece of 3/4" pipe using a rawhide mallet. It took some stretching to form the compound curves. Eventually the sections were soldered in place on the bottom edge only, as they tucked neatly under the rim. Jon McCabe informed me that on one of the relic pans he studied, the wire was absent from the rim entirely.


When my pan was finally finished the best part was taking it into the field and using it. With the pan loaded  with water and material, it is noticeably easier to "take hold of" as Lord described. I love it ! History you can get a grip on.