More 19th Century Angling, This Time It's A Reel Adventure


This post continues my revisit to early 19th century angling with a little more information on reels. In my original post of February 2011, I outlined my quest to recreate typical coarse fishing tackle in use during the 1840's but left out a lot of the fun stuff  I learned along the way. One thing I discovered was that  sophisticated multiplying reels were crafted by watchmakers in Kentucky as early as the 1820's but that style of reel was actually invented in England in the18th century.

Even though these reels represent the finest offerings of their time, I realized immediately that they were a little beyond my "shade tree" machinist's ability to recreate. Besides, even if I thought I could pull one off, I don't own the lathe to make it happen. What I was looking for was a simple and typical "winch" of the period that I knew I could copy and use. Multiplying reels were revolutionary and allowed for direct casting of line off the reel whereas simple winches were just for storing line.

First, a little history is in order. It's believed that the fishing reel originated in China, sometime around 300-400 AD based on depictions in surviving art.

Taking a giant leap forward to England, Thomas Barker mentioned a "wind" and provided a cryptic drawing of some kind of reel in his 1651 publication "Delight or the Art of Angling" and a little later Robert Venable used an illustration of a clampfoot reel in the front piece of his 1662 " The Experienc'd Angler or Angling Improved".


By the late 18th century, it appears by all accounts that the reel was an accepted part of the angler's kit in Europe and in use by at least some gentlemen anglers in America.

I think it's safe to say that by the 1840's, the reel was considered an angling essential and I would imagine a typical American tackle shop might have offered a range of reels of varying qualities and styles. I assumed from the evidence that early reels were typically crafted of nickel silver or brass until a well crafted wooden version caught my eye.
Image Courtesy Mullock's Auctions

This particular wooden clamp-foot reel is quite rare and turned up in an auction in the UK. As cool and early (perhaps too) as it is, I decided to make mine a reproduction of an all metal reel.  I chose brass since it's easy to come by and easy to work with and I already have a brass scrap pile to dig through.

Style wise, early 19th century winches can be categorized according to how they attached to the rod. According to some historians, the spike-foot reel may have predated the clamp-foot which predated the plate-foot. Are you with me so far ?

What I know is, at the time of T. F. Salter's "The Angler's Guide" (1823) the clamp-foot and plate-foot co-existed as seen in his illustration. Salter's plate-foot is early enough in style to have a padding attached so as not to mar the rod. These stitched on pads are fairly common on surviving clamp-foot reels.


I started to warm-up to the clamp-foot variety as it was certainly around in the 1840's and even up to the 1860's by some accounts. Once I gathered enough information, I made a scale drawing of my reproduction and began scrounging up the brass stock. I previously mentioned the absence of a lathe in my shop. A considerable deficit for the well-rounded craftsman of today but for me there's always room for improvising a substitute.

Years ago I discovered that you can center and spin small, flat pieces of metal on a drill press if you support the arbor from below. My arbors usually consist of a small diameter bolt with nuts and washers to clamp the work. The support from below is held in a vise that I clamp to the drill base. Most of my milling and cutting is done with a well-braced Dremel tool using their cut-off wheels and circular files. Safety goggles are a must as is a steady hand. Laying everything out first with a sharpie is also very helpful.

Warning, I do not recommend this as a practice but included it here as a document of my work.

When all the circular pieces of the reel were finished, I cut the pillar rods to length and turned their ends diameters down for eventual peening. The other end of the pillars were drilled and tapped for screws.

One of the little challenges was to accurately die stamp the cupped ends of the reel's spindle so they could rotate smoothly on center, in their proper recesses.

The clamp foot part of the reel is riveted to a stout bar that helps to maintain the reels integrity as a stable cage for the spindle. One end of this bar was riveted to the outside plate with two pins to prevent twisting. When it came to making the actual clamp, I found it difficult to get a tight bend at the bottom, so I cheated and hard soldered on separate pieces at the proper angle. I really love the way the heart shaped screw turned out. It's a great period detail. 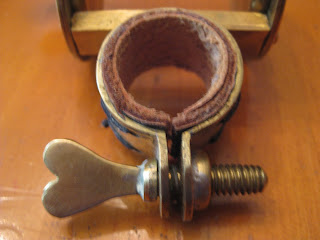 The final challenge on this project was creating a functional clicker mechanism. Luckily I had made some notes and a drawing of my antique English reel's clicker when I rebuilt it.

So there you have it, it turned out to be a "real" adventure after all but worth it.

Back in January of 2011 when I  posted on my exploration of mid-19th century angling, I barely touched on most of the subjects. In the next few posts I hope to revisit some of those topics with a little more depth. This first return visit is on early creels and as you will see, my research turned up some interesting varieties.

Before I made my own version of a classic "pot bellied" creel, I wanted to study some of  the material options available at the time. Creels made of leather seem to be some of  the earliest and rare forms to have survived. Experts date some back to the 18th century but as you can see below, they were still being used in the late 1800's as well. Most of these are English in origin but who's to say they didn't make it to the States.

I found one fine example adorned with the former owner's fishing triumphs, celebrated with brass plaques dating to the 1890's. Maybe the 90's angler was using a family heirloom.

As much as I love to work in leather, the challenge of a large molded form was a little intimidating to say the least. I also had a problem with the idea of putting slimy little fishies into a leather container, so I decided to pass on leather.

I imagined the possibility of a wooden creel but wasn't sure how that might have worked. The weight issue of a wooden form caused me to think that a lightweight, bentwood design might have developed. Bentwood storage boxes were very popular in the 19th century but I couldn't find an early example of a bentwood creel and I wasn't interested in creating a fantasy piece.


Long after my creel project was completed, a bentwood creel did turn up and proved my hunch. As you can see in the pictures it does possess round storage box characteristics. Perhaps a fun project in the future.

Continuing on, I toyed with the idea of metal for creel material. Tinsmiths could make almost anything imagined so it seem plausible.  My research didn't turn up a datable example, so I continued on with my quest. Never say never as I recently discovered what may be a rare tinplate (or zinc?) creel from the mid to late 19th century. I'm no expert but its potbellied form is undeniably classic and combined with the construction details, screams "early". Hmmm, maybe another future project ?


I finally decided to reproduce a basket creel. Many early 19th century angler's guide books describe creels as baskets and the earliest photographic and print evidence supports their popularity as well. I know that center hole basket creels have been around at least since the 17th century. Robert Venable's book "The Experienc'd Angler", published in 1662, shows one in its front piece illustration seen below.

Centuries later the popularity of baskets as creels continued as seen in the print below.

Some of the most appealing 19th century basket creels were made of finely split willow and according to some accounts, many of the earliest were French in origin. Later imitations of French creels were apparently produced in Japan. Imitation or not, they are beautifully made and way beyond my skill level to reproduce.

Note the Variety of Basket Creels

When I finally turned up a little less refined 19th century willow creel, I felt there was hope for my reproduction project to continue. Apparently, not all creels were works of art.


All I was left to do was locate a source for the proper willows and a pattern for a creel. Just that. I lucked out when I discovered Bonnie Gale's English Basketry Willows. Not only did Bonnie sell the exact willows I needed for the project, she also offered a beautiful basic creel pattern seen below. 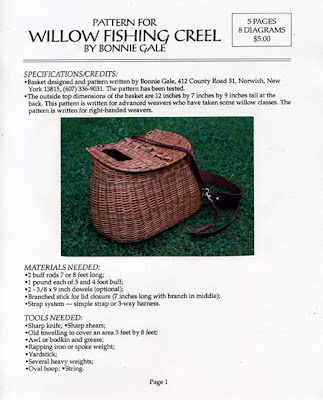 I figured the pattern would give me the basic form and I could amend as I built the creel to get closer to the pot-bellied shape. That was the "plan" at least. After the willows arrived in a very l-o-n-g bundle, I did a little experimenting to discover what I had gotten myself into. The willows have to be soaked to be pliable but not too long mind you. Too long and they get all mooshy. They needed to be just right. After their soaking and while they are waiting to be woven, you wrap them in a damp towel to keep them pliable. Good thing we have two bathrooms, as the only place that I could soak the willows, was in my bathtub.

First I needed to grade the willows by size and make some choices on weave designs. Bonnie's pattern was awesome but in truth, I had no idea what I was doing. That's never stopped me before and so armed with excellent instructions, I plunged ahead. One thing I learned right off was that you need to have strong fingers, about five more than nature provides. You also need room to swing the willows around as you weave.

I'm pretty happy with the way my beginner basket / creel turned out but I can almost hear Bonnie saying, "your third one will be even better". 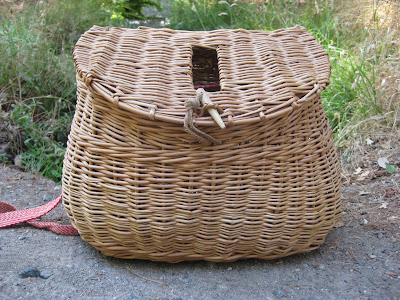 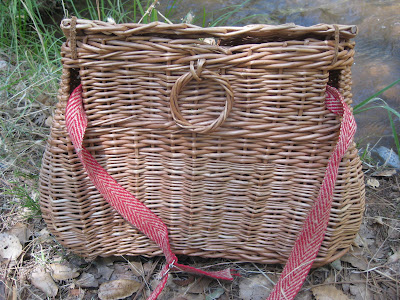 Back view showing the hanging ring seen on early examples. Note also the curved
shape to hug your hip and the holes for the strap 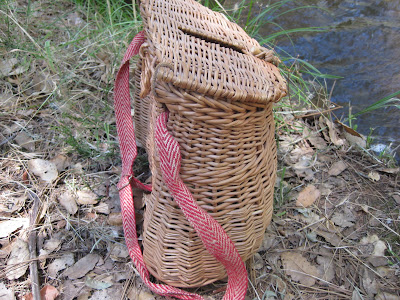 Side view showing the narrow profile 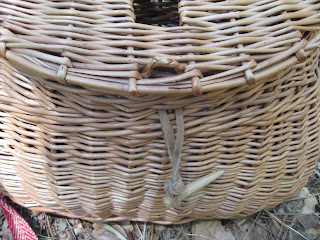 Top view showing the detail of the latch pin 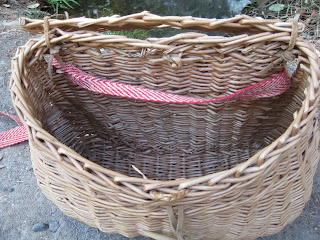