How They Kept Their Clays Safe, Revisited

I recently stumbled across an interesting example of an antique tin pipe case, on an online auction. You often see late 19th and early 20th century tin cases in the shape of the clay pipes they protect, but this one was different. Not only did it safely stow the pipe but housed the tobacco as well. There's even enough room in it for a match safe which suggests it might have been a sort of traveling smoker's kit. From the construction details, I would date it early to mid-19th century.

The design is pretty straightforward, so replication was not going to be a problem. Luckily, I had a nice English clay that I purchased from Columbia Booksellers. It was one of the last Pollock pipes that he had. I decided to build my replica around this pipe instead of copying the exact dimensions of the original.

The original case is 6  1/2" long by 2" wide. It's an elongated box with one closed end and the other with a hinged lid. Under the lid, you find a compartment sized for the pipe's bowl. Inside, at the back of this compartment, is a panel with an attached and extended tube, to protect the pipe's stem. On the top center of the box, there is an opening for access to the tobacco etc. and a hinged lid to cover it. That's pretty much it, a simple yet effective way to keep your fragile clay pipe safe and your tobacco handy. 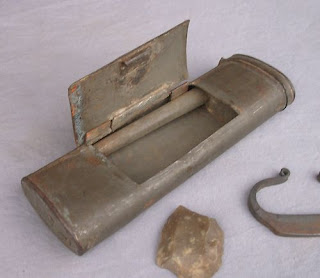 In some of the pictures of the original case, you will notice a fire steel and flint. At one point in this object's history, it had been repurposed as a tinder box or..................was the smoker lighting his pipe with flint and steel, hmmm? 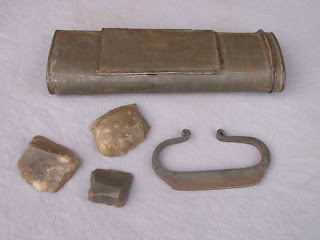 Here you see the beginings of my replica with the shaped and tapered tube and the above mentioned panel. I had to keep in mind that the pipe shouldn't rattle, so my dimensions were determined by the space occupied by the pipe bowl, while it rested in the tube. Do you follow ?

Further along now, you see the beginings of the case body. It ended up being 7" long and 2 1/4" wide.  Note the raised ring on the right, that will be the seat for the pending lid. You can also see the tube running along the inside back. 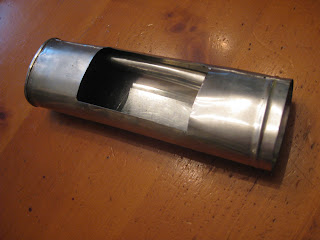 Now we have the end closed and we are ready to craft a hinged lid. It's starting to look like something. 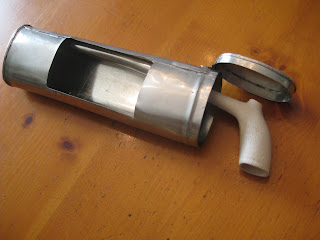 The smaller hinged lid is in place and all that remains is the large, hinged lid on top, with its latching device. 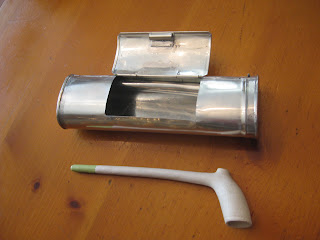 All finished and good for service and ready to claim it's place in my growing collection of replicated odds-n-ends  from our past. 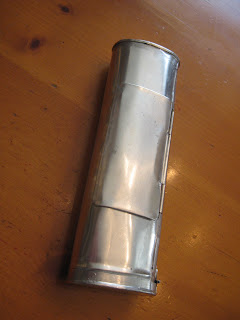