Making a Spectacle "for" Myself, A Revisit to 17th Century America

Once apon a time I was quite the collector of old stuff. Apparently I had more disposable income back then or antiques were more affordable. Much of my accumilation focused on early to mid 19th century personal items like men's clothing and accessories. One of my favorite accessory catagories was historical eyewear. I still have a nice, small collection of spectacles including the oldest pair I could every find or afford, circa mid-18th century. Spectacles have been around for 700 years but the further back you go, the rarer and pricier they become.

Lately I've been interested in the kinds of spectacles that might have been worn in 1600's Colonial America. With auction prices around $3,000.00 to $4,000.00 for early Nuremberg wire or leather nose-bow spectacles, it's pretty certain they won't find their way into my humble collection. Oh darn !! But then, would I deny myself the fun of replicating a pair ?....... not likely.

Every successful project begins with research and luckily I have a few good books on the subject. "A Spectacle of Spectacles", Carl-Zeiss-Stiftung Jena 1988, has some nice representative replica pairs. Pierre Marly's "Spectacles & Spyglasses" 1988, documents many 17th century nose besicles in whalebone, horn and brass wire. "Eyeglass Retrospective", Nancy Schiffer 2000, has a whole page devoted to 17th century leather frames. Most of them appear to be rather crudely made but I have seen more carefully crafted examples, like the one below.


An amazing opportunity for studying leather spectacles, is in the recovered cargo from what is known as the Gnalic shipwreck. Lost in a storm in 1583, near the rocky islet of Gnalic,south of Croatia,  archaeologist began recovering its cargo in 1967. Included in that recovery, were 20 boxes of Nuremberg type leather spectacles in an amazing state of preservation. Each box contained 12 pairs, which greatly increased the number of know surviving examples in the entire world.


Today there are some pretty awesome online resources for studying spectacle history. One recent discovery that I've been revisiting is "The Online Museum and Encyclopedia of Vision Aids".


I finally decided on replicating a pretty typical leather Nose Bow Spectacle that might have originated in Germany (or what would become Germany) in the 17th century but made its way to America. For the leather I chose vegetable tanned cowhide, approx. 4mm thick. First I used a 1 1/4" punch to knock out the circles that would accept the lenses. Luckily, I had some vintage lenses that worked as "readers" for my weak eyes. To cut out the outside shape of the frames, I used a No. 11 xacto and carefully followed my pencil marks. The lens holes were slightly smaller than my lenses and that tension kept them in place. I then dampened the leather and molded it nicely around the lens edge. When you carefully study the Gnalic specs, it appears that they might have been two pieces of leather,sandwiched together but I'm no expert.

The case I decided on was a simple wooden version with some typical features that I had seen in several original examples. I found that wire loop-pin hinges and a simple wire hook closure suited my needs. For the body, pine seemed like a good choice for carving because it's a common wood that's easy to work. 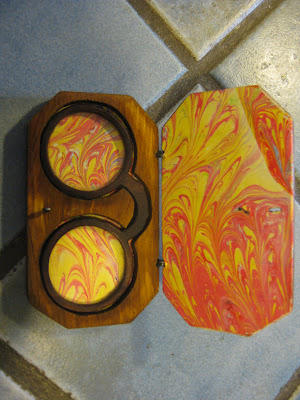 I couldn't resist the look of the marbled paper for a lining. This shows my replica leather specs inside their case.

When I recently aquired an Uberti 1851 Colt Navy, it occured to me that the belt and holster that I made for it might make an interesting blog posting. This story starts several years ago, when I was researching the common use of web belts and military style buckles in Gold Rush California.

Stamped or cast brass tongue and wreath (aka spoon and wreath) buckles are fairly common artifacts found in gold rush camp sites. I have several  friends with large and varied collections, which is strong evidence of their popular use in the period. Dagguereian scholars consider them a key element when trying to identify "Gold Rush" portraits. In fact, it was one of those incredible, documented images that actually inspired this project.

What I love about this image is how it captures the spirit of the age. These guys knew they were making history and proudly left us a record of their part in it. I feel that the buckle on his belt is likely a stamped brass version, possibly Taussig - Pollack & Co., San Francisco, similar to the example below.

The belt in the image appears to be made of webbing and a clue to it's actual weave and color came from an associated artifact that I had previously blogged about. The contemporary "gold porter" below, has what looks like the same webbing to join the two buckskin halves of the vest, as you can see in the picture. The most compelling evidence that it's the same webbing, comes from the historic record that Taussig - Pollack & Co. were selling gold porters in San Francisco. The only flaw in my theory is that the original porter below is unmarked.

With this evidence, I proceeded to make a facsimile of a classic miner's web belt and buckle. The buckle was the easy part as Hanover Brass has been casting copies of Gold Rush buckles for years. The belt on the other hand, would take some thought. I knew I wasn't going to weave a belt from scratch but instead settled on dyeing modern cotton webbing that had a similar pronounced woven pattern. After the webbing was dyed a dark indigo blue, I picked-out the woven threads along its borders to make room for the two white stripes. I carefully wove white cotton cord back into the webbing to simulate the stripes of the original. All in all, it didn't turn out too bad. To improve the overall appearance of the belt, I applied another length of dyed webbing to the back to hide where my white stitches came through.

After I made a brass keeper slide, I assembled the belt around the repro buckle. It's not a perfect replica but I consider it a good impression. Before I had started the belt part of the project, I had made what collectors call a "Slim Jim" (no relation) holster for the Colt Navy. Using origninal examples form Richard Rattenbury's classic book "Packing Iron" for the pattern, I made mine in veg tan leather, sewn with linen thread. I like the look of the straight throat on many documented examples (including the one in the daguerreotype above) and left mine unadorned as many of the earlier holsters appear to be. One last detail was to wet mold it to the revolver.

So there you have it. Now, if I choose, I can sport my shooting iron in a style not commonly seen today but very much a part of our California history.
Posted by Jim at 8:41 AM 1 comment: