My adventure into mid-19th century artificial baits continues with a focus on critters that hop.  In his 1849 edition of "The American Angler's Guide or Complete Fisher's Manual for the United States", John J. Brown makes several references to the use of artificial frogs and grasshoppers as bait. He even  kindly provided engravings of said baits in his book.  Brown was also an established  tackle dealer in New York and advertised that he carried faux frogs and hoppers so their availability is not in doubt.


To my eye though, Brown's depictions seem closer to nature than what the actual baits might have looked like.  I thought it would be a good challenge to reconstruct these baits using period materials and from what I could gather, period techniques.

While researching this subject I discovered the work of Louis Rhead,  a successful and well respected artist in the late 1800's and early 20th century.  What caught my attention was his work as a devoted and published angler. Late in life he wrote the "Fisherman's Lures and Game Fish Food" which has oodles of info on his work as a tackle maker.

In this book Rhead kindly shares details of how he made many of his nature baits, including frogs and grasshoppers. His complete descriptions including materials, sketches and photographs encouraged me to consider this resource as the best chance for my project to proceed.


Although of a later period, the handmade nature of Rhead's baits continued the crafting tradition, so evident in surviving early tackle. Besides, I haven't been able to locate any documented artificial frogs or grasshoppers from the mid 1800's so this reconstruction will have to stand on its own merits.

For my version of Brown's 1849 Frog Bait, I chose cork as my material and Rhead's technique of wrapping the body parts with brass wire.  Aware of the fact that an actual bait should survive numerous strikes, I made sure my design was literally "wired together". For hands and feet, I used hemp cord, wrapped with fine copper wire. 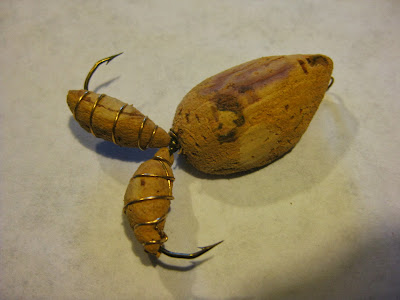 Here you have the first parts coming together with the two hooks imbedded in the thighs and anchored to the front loop (barely visible). 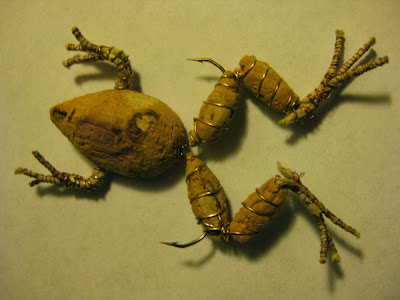 More parts are added and it starts to look like something. 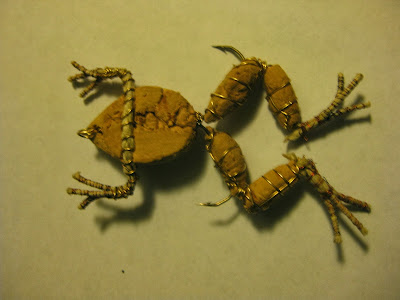 Underbelly view showing the front legs in place before lower body was wired on. 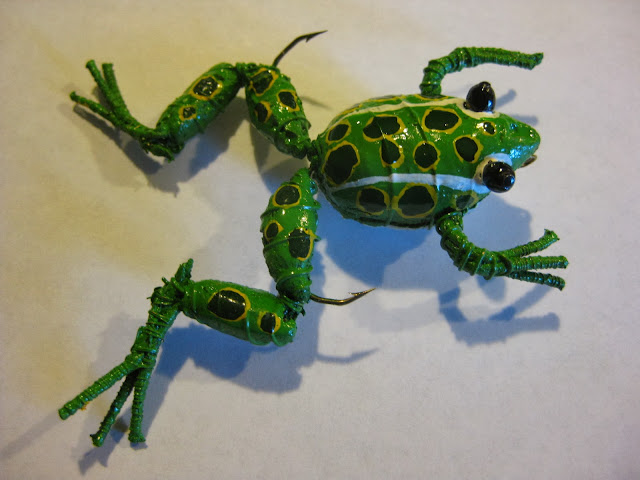 Finished, painted and ready for Mr. Bass' last meal. I think today's collectors might call this a "Folk Art" frog.

Part two of this project, the reconstruction of a mid-19th century artificial grasshopper bait, started with research. Some time ago I had discovered several "vintage" hoppers that caught my attention as nicely crafted deceivers.  Built around a single hook, they all appeared to have wrapped cork or wooden bodies and quill wings and legs.

Two of these vintage grasshopper lures used a bent feather spline to suggest both back legs and antennas, which is pretty sweet (see above). In contrast, Louis Rhead tied his rear leg splines to the bend in the hook for a more realistic pose (see below). Who knows what mid-19th century tackle-crafters used or did exactly, so for my recreations I decided to try both ways.


One exceptional turn-of-the century hopper showed up on an online auction from the UK. It appears to have legs (at least in part) made of green painted cordage. Maybe I'll try that on the next example I fabricate.